Posted on November 23, 2010 by brushedwithmystery 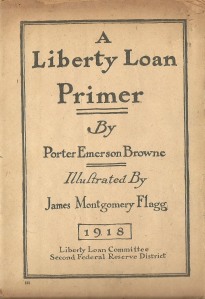 I found this in one of my gran’s journals from World War One.  It is about 20 pages, and reads like a child’s song.  The goal of the pamphlet is to try and sell Liberty Bonds- in Canada we call them Victory Bonds.  During World War One, governments created these bonds to help pay for the war.  It was a way for people who were not fighting- or that couldn’t fight, to support the war effort. They would give the government their money and after a few years, would earn interest on their investment.  I’m not certain how the American government did with this venture, but it was very successful in Canada.

What is curious is the target market- children.  I have printed a ‘tamer’ page here, but it is certainly anti-German due to the World War.  I guess children were given these in school, and then would go home and ask their parents and family members to support the war.

What a riot it would cause if something would be done like this in school today!