The Beauty of Colour: Vermilion

Posted on June 27, 2015 by brushedwithmystery

credit Richard II for my most recent research project.  If he hadn’t been wearing a cloak painted with Vermilion kneeling before the Lapis Lazuli enrobed Madonna, in the famous Wilton diptych, I would never have started my exploration.  I have always been fascinated with art; the ability to create an inspirational piece through one’s imagination is magic in itself. When you combine this with the historic challenges of finding, mixing and ensuring the resilience of the paints used, it is amazing that so many artistic pieces survive the centuries to share their stories.

Vermilion, I was to discover, has a long and very interesting history.

The colour Vermilion is made from the mineral cinnabar. This ore also contains mercury which is a toxin to the human body. If ingested or inhaled it can kill or corrupt the victim, if held in the palm of a hand the heat could release the mercury- a dangerous beauty indeed. Vermillion is a derivation of Latin vermiculus, or worm (most will correctly connect vermin or vermicelli with the Latin word), wrongly connected with another dye that could be made from an insect  Kermes vermilio.   Kermes, or as we know it today as Crimson.  Our crimson is synthetically produced, no worms were harmed in the making of it.

There are very few mines for cinnabar, but the luck of the global community, it was spread out fairly.  Each continent received their own supply. Vermilion can be found in many of the world’s most established civilizations: Chinese, Indian, European, and Mayan.

Red is universally seen as a symbol of longevity and nobility; the colour of blood- life itself.  The power of the upper class is based on their ability to pay for this hard to find- dangerous to handle resource.

Possibly used in human art since 25, 000, Vermilion has an exciting history.

The Romans got their supply of cinnabar possibly from the Almaden mine in Spain, which even today has the largest supply of mercury in the world. Spain has mined cinnabar from around 5300 BCE. Pliny the Elder in his Natural History mentions, vermilion or minium- even today there is a confusion with led. 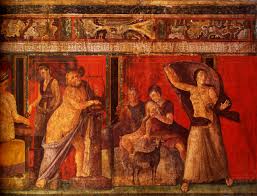 While Pliny does not know the origin of the ritual, he believes it to be religious in nature; the head of the statue of Jupiter on the Capitolinus Hill in Greece was covered with Vermilion, a symbol of honour for a military leader.  The Roman people would follow this tradition to honour every general who brought their country victory through battle, by adorning their head in vermilion; symbolizing blood of their enemies or miraculous life in the face of death.

When Mount Vesuvius erupted in 79 AD, it covered the city of Pompeii in Volcanic pumice and ash. Pliny the Elder was one among the thousands who lost their lives in the natural disaster. Uncovered from the sixteenth century to the present day, are the three dimensional lives of the people.  The rich residents had their dining halls adorned in cinnabar.  One example is the Villa of the Mysteries in which the dining hall is covered with what looks to be a woman going through a religious rite- possibly marriage.

Cinnabar was used in the Mayan culture; famous for their blood lust, and the connection to life and death. Lord Pacal, the longest living ruler of Mesoamerican history, died in 683 CE. He was regally buried in the Temple of Inscriptions, in Palenque, with jade adornments and Cinnabar sprinkled throughout his tomb and painted on his sarcophagus. Dating from the same time is the ‘Red Queen;’ a noble woman, richly adorned for the afterlife, and covered in cinnabar.  Some sources say she might be his Queen.  Cinnabar was also used for incense; the transmutability of the mineral turning into mercury would highlight the change from life to death and the mystery of the world.

ding to some scholars, the use of vermilion was introduced to the 11th and 12th centuries, but the tradition of Sindoor Dana has been honoured for over 5000 years.  Sindoor Dana is still practised by Hindu’s in India and around the world; the groom places a line of vermilion (and turmeric and lime) down the front parting of his bride’s hairline.  A woman who wears this is ensures her husbands protection by the Goddess Parvati. The wearing of Sindoor is found in the Mahabharata. This communicates the life of a couple’s new union, and ensures the husband’s health. It is believed it stimulates the chakras on the forehead and the crown. The bride will apply this every day for the rest of her marriage.  It is taken off by an older woman when the woman becomes a widow. It is believed the Sindoor will calm the bride, give her clear thought and ensure sexual energy; this is why it is forbidden for widows.

Having just touched the surface of the life history of this amazing colour, I hope to learn more in the future.