Posted on February 29, 2016 by brushedwithmystery 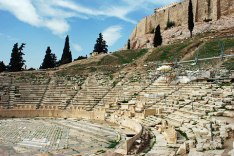 It is the morning of the first day of the City Dionysia.  The event takes place in Athens, a city state on what is now mainland Greece. It is one of the most powerful cities in the Ancient world. This is the home of modern philosophy, mathematics, democracy and -for our interests- drama.

Athens is a city that has grown into the very hill that surrounds it.  The most important temple of Athena, the patron Goddess of the city, stands on the highest hilltop. It overlooks the Mediterranean Sea, and guards the many fishermen who venture out to feed their families and obtain some additional income.

Just below this temple sits the theatre of Dionysus; a theatre dedicated to Dionysus, the God of wine and merriment. The seats are carved into the hill, and almost 15, 000-30,000 citizens can attend this performance. In a matter of hours, as soon as the sun rises, this theatre will hold all of these citizens and more.

The priests in the temple of Dionysus are preparing the statue of the God. They will ceremonially wash, cleanse and feed the statue before he is carried at the front of the crowd of Athenian citizens as they walk to the theatre of Dionysus.   He will be placed in the seat of honour at the front of the theatre.  A goat will be sacrificed to him, indicating a beginning in the ceremonies.

It is a civic duty to come to this event.  Everyone has the day o

ff.  The fishermen will not venture out today.  The event is important for many reasons : it is honouring the God Dionysus for his help in keeping Athens safe; it is part of the citizen’s civic duty; and it is believed that the act of crying at a tragedy will purify a person.

The God has taken his place at the front of the stage, and people file through the entrance of the theatre and take their seats where they can find them. They have brought food and drink for the day- the performances will last until the sun sets.  This will be a week-long event, and everyone has been eagerly awaiting it.  Playwrights will compete for a coveted ivy garland that is made of gold, and more importantly the bragging rights to claim themselves the winner of the City Dionysia.

Each playwright must write three tragedies, usually about myth or legend.  Originally, when the City Dionysia started, there used to be a huge chorus; sometimes 300 people. They were regular citizens that were required to offer their time to support the competition.  Slowly over time, the chorus started to disappear and one or two actors replaced the chorus. 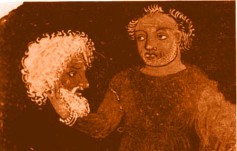 The audience of Athenian citizens can hear the plays very well, even if they sit quite a distance up the hill away from the stage.  This is possible because of the natural acoustics of the mountainside and the bowl shape of the theatre. The actors also are wearing large masks over their faces with a hollow mouthpiece that has a megaphone to project their words.  The actors wear stylized costumes that communicate their role in the presentation (rich, poor, man or woman).   They wear huge platform shoes that add additional height so that the people who are sitting high up on the side of the hill can see them better. They, like their audience, are only men.  There is much debate whether women could attend the theatre in Athens.

The day is long and pleasurable: as the sun sets the audience will have seen three tragedies from one playwright and a set of comedies at the end of the day.  The god will be returned to his temple, and everyone will spend the rest of the evening discussing the plays over their rice, fish and olives. They still have another six days of performances to experience, and everyone is eager to see the other playwrights’ work.