Posted on July 14, 2018 by brushedwithmystery

I have visited the grave at least once before on Dartmoor.  You could easily miss it; save for a flash of colour at the side of the road and the elevated earth and stone that marks the resting place.  The sense of crossroads is blurred, as two directions look like private laneways now.

Local lore says that the grave is the burial place of a girl who took her own life named Kitty Jay; possibly three hundred years ago.  Those who committed suicide were denied burial in the consecrated ground of a churchyard.  Loved ones were known to bury their tragic family relations at a crossroads.  If the dead were not given a proper Christian burial, it was believed that they would wander the earth. Family members were afraid of such supernatural haunting, even if the deceased were beloved while alive.  The crossroads would offer direction for the soul to wander, and everyone hoped that it would be the road out of town.

Kitty Jay is remembered through oral and written tradition in Dartmoor.  The oldest accounts of her story were written down from interviews with the local residents in the mid nineteenth century.  The catalyst for exploration of the story was the discovery of her bones.  One resident claimed she lived three generations back at the time, which would make her story possibly a hundred years earlier. 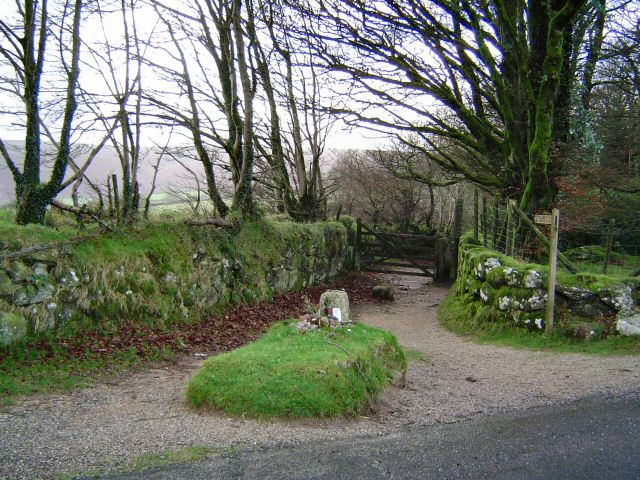 As many locals as there were to interview, there were just as many versions of her story.  One account claims that she was an orphan, a vulnerable young girl, who was possibly working for a family.  She committed suicide in a nearby barn.  One strand of her tale is that she had a relationship with a local lad, either willing or possibly not.   The result might have been pregnancy, a condition that would have meant immediate isolation from society.  Some stories tell of her being fired because she was discovered in the ‘family way,’ and they didn’t want her terrible reputation tarnishing their good name.

No matter the story, the theme is the same: a young disadvantaged girl who suffers and takes her own life.

The fact that we still know the story of Kitty Jay speaks of a connection; a spark of compassion that ignites when we hear her story. Cut flowers have always strewn her grave, from the earliest knowledge of her resting place.  Her story is a universal tale of struggle of the individual, society and self.  It also illuminates the challenges women face in society.  Many of us can see how we too might have become a tragic figure like Kitty Jay, and honouring her memory is honouring the outlier; understanding that the laws and traditions in our society that sustain us, can also act as a barrier for personal wellbeing and health.