As you turn from the sidewalk to face the house, you are flanked by a stone wall standing as a sentinel. The house is one of four-it was five before the fire of 1900.  This house is the only house that hasn’t been changed from its original architecture.  There is a gabled roof.

The porch stands over the door in the fashion of another time-pagoda style- holding the seasons at bay.

When you enter this house, there is something in the air – the memory of Christmas celebrations with my grandparents: much food, a welcoming fire, and laughter. There is the hum of lives that are passed- my great gran moving her young family into the house 100 years ago.  Her anticipation for the future.  There is now my own history- sleeping on the hearth rug at 4-5 when everyone else was downstairs.  The sound of laughter, and peaceful sleep.  A youth and teen dreaming of my own future.

Roots, welcoming, a whisper of spirits.

Anyone who knows me, knows that I am fighting to keep this house in my family.  This space is my attempt to share my memories, and if I do have to sell (her), then it will be a place to remember. 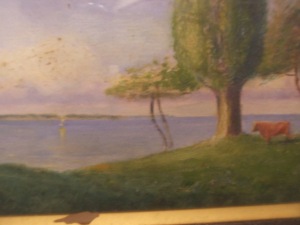 The view from the front of Hales Cottage- painted by W Shortt- brother of gran’s best friend. 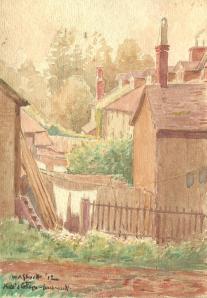 I have very few pictures of her.  I will have to search the basement. One of the few I do have is a picture of her and her two children: Guy and Marjorie.  Taken in Gananoque- the handwriting on the back tells me that my gran is two. I think her brother is three. Having collected some of the pieces of their life’s puzzle, I know that this picture is taken in 1897.

While the two children look with polite attention, my great gran is in profile.  Was there something that caught her attention, or is this picture not about her? A picture of the children to show to extended family.  Why is my great grandfather absent?  There is another eleven more years of his life that he will share with this young family before he will be buried in the Lansdowne Union cemetery.  Possibly his age was an embarrassment- born before Canada became a country.  Great gran married a man when he was forty seven.  She would have been closer to twenty.  Why did she marry a man so much older? Was she in love or was he a logical choice-good prospects?   Did they try to keep their feelings from each other because of the taboo of age?  Possibly it was normal for women to marry men almost twenty years their senior. Where did they meet?

It is to her I am drawn.  She is mingled with the essence of the house.  She is the origin –the eve- of my connection to this house.  It is she who brought her family to Hales Cottage.  First staying with two elderly aunts at #4 Hales Cottage after the death of her husband, and then buying #2 Hales Cottage when it became available.  From her I have the middle name -Campbell- a name that she gave to her daughter, and that my mother gave to me, and I have given to my daughter. When I came home from the hospital I was taken to Hales Cottage to visit gran and granddad.  I was proudly set upon the Campbell Black Watch tartan-this was my first baptism.

Much of her life lies hidden in time, but there are pieces to this puzzle.  I have a document that says her first communion was in 1880. I know she was married in 1890 in St. John’s Church in Portsmouth. 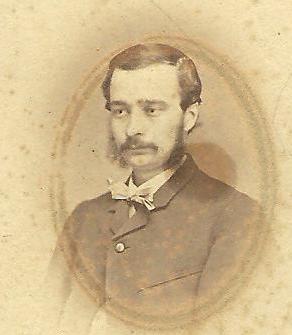 I have her wedding band.  I know the size of her wedding finger- almost too small for Morgan to wear at four years old.  My gran and my mother were no taller than five foot two- she must have been the same.  I have the picture, and my memory.  My gran had blue eyes.  While the picture gives nothing away but a blend of white and grey, I can see that her eyes were light-probably the same as my gran. She has a strong face.  Her hair is brown and tied up in a respectable bun, but not pulled tightly back. She was not a perfectionist but an essentialist- I will guess that she did marry for love.

Like me, she was a teacher. She completed her education in Picton.  Somewhere in the house I have other journals of her life during that time-1888.  She would have worked until she was married.  After her husband died, and she came back to Kingston she returned to teaching.  I found a teaching contract dated 1912.  She taught in Portsmouth in the stone building across from the harbour on King Street. She taught there for many years.  Her work was fifteen minutes from her home- what she would think of me driving five hours daily?

I have her journals from the First World War when her son joined the Great War. She follows the War, both as an educated woman, and as a mother who clings to every drop of news that will assuage the terror of losing her only son.

My mother only had vague memories of her.  To my mother she was called “ockey”- a baby word for a request- ‘rock me’.  This was her name for the brief time that she knew her granddaughter.  I don’t know yet when she died, but her tragedy was that she developed Alzheimer’s disease in middle age.  Her memories were erased before her life was over- only flitting sporadically in and out of vision briefly day in and day out. Her daughter- my gran- developed the same cruel disease.

It is her-Helen- I feel is a presence in the house.  Hopefully after reading her journals, I might know her better.

View from Hales Cottage looking out 1910: 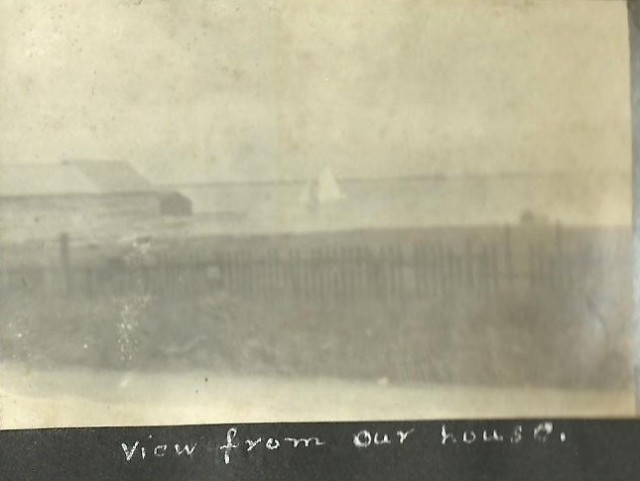