Posted on February 9, 2011 by brushedwithmystery 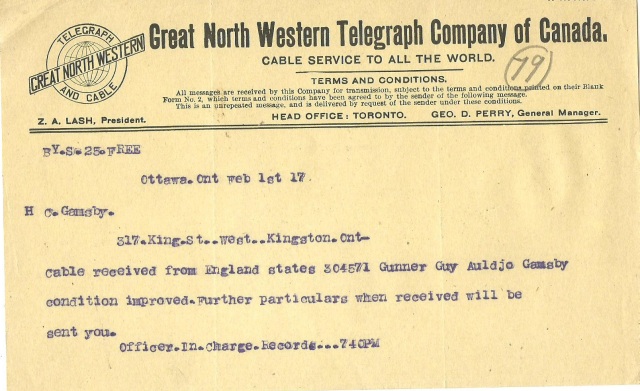 I was a very happy person when I went into town Wednesday 31st.  I had just received a letter from Guy(her son).  That was great joy of itself and in Guy’s letter were these words, “I received a letter from Mrs. Shortt saying that they had definite information that Allen (friend of the family) was a prisoner in Germany and unwounded.”  I read that and then all alone in the house I sang and danced.  I was so glad!  I ran to the telephone to tell Marjorie(gran).  Afterwords I went and met the latter at the Bank.  She had to work late because it was last day of the month.  We went to the new restaurant on Princess St.  and had tea there afterwards to the “Grand” to see Aladdin and his Lamp, a perfectly splendid English pantomime.  Very patriotic too.  It was an all English company.  They sang “Somewhere in France” and “Good Luck to the Boys of the Allies.”  They had a good many girls dressed as the Allies and a Rule Britannia Scene also at the end.  There were numerous spectacular effects.

Marjorie had a letter from Donald Fraser (first love?) and I had one from Mrs. Gill.  She does not know at all of Guy’s illness.  I got another cable last night from the Militia Department.  It said “Condition improved further particulars  when received will be sent you.”

He says,”Here I am at a Canadian convalescent hospital getting along nicely.”  He then acknowledges letters of mine of the following dates: Nov 19, 22, 26, Dec 3, 7, 10, 17.  In my letter of Dec 7th he says was a M.O (money order) for $5.  He got our xmas parcel about New Years.  He says that though he is a little weak and his nerves on edge there is nothing wrong with his appetite.  He encloses a snap of a group of wounded soldiers taken of his ward 6 in Bristol Hospital.  Guy can be plainly seen and it shows those fine decorations of which he spoke.  Nurses dressed in fancy costumes may be seen also/   Guy mentions having received also the box from Marie Shortt for which I sent her the money.  He liked the snap of Aunt Tiny and myself which Marjorie took before Christmas and says I only  imagine I am looking old.  He says he is not sure when he will leave Bearwood Park but thinks it may not be long and says he wants to take a trip to Ireland before he returns to the Front.  He wants to continue to send his mail care of Miss Esson Scotland.

Now having disposed of personal matters what shall I say about the war situation.  Well the war may be said to be dramatically tense-The  United States is again on the verge of war with Germany and possibly the wolf may really come this time! Germany has sent out an announcement to the world that she means to begin a ruthless submarine warfare on all vessels of any kind, merchantmen  and co.  of  neutral or enemy nationality.  She announces that neutral ships can go in certain districts the routes laid down by her.  They must paint their ships certain hues to be visible to her submarines.  A blockade of British Isles, The N.S. may have our merchantmen a week go to Britain etc and more of it and unspeakable announcement of all they announce they will sink hospital ships crossing from France to Great Britain.  It is said will escort ships laden with food and co. by armed cruisers.  About 2000 Americans are now on the High Seas and some are quite close to the danger zone.  Tonight the paper says that neutrals like Switzerland and Holland are calling on the United States to help them as this unrestricted submarine warfare means starvation and ruin for them and their fate of Belgium and Siberia as it is plain  they fear that Germany will soon cease to respect their neutrality.  The American Press calls on the United States to sever diplomatic relations with Germany forthwith.  Stocks fell on Wall St. and most of the wall street journal’s seem to think mar immanent, but it has looked as as this before and all Wilson did was to use his ‘pen.’ He may yet believe it “mightier than the sword”  He may yet stave off by fair words this critical time.  But!  If he does!  the fair fame!  The high position, the glory of the United States must depart and never again in this Generation will she be able  to take her place among the free nations of the world respected or self respecting.